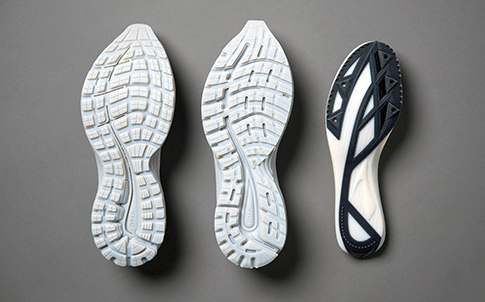 “Run Happy” is more than a slogan at Brooks Running; it’s a state of mind.

“Everyone here runs,” said Kenny Krotzer, associate footwear developer at the company, based in Seattle, Washington, “even the CEO. He wasn’t a runner before joining the company, and now he’s a die-hard.”

But staying ahead of the curve in shoe design and technology requires nothing short of fancy footwork.

“We’re working on two to three seasons of shoe designs at once. We’ll get files for all five fall shoe designs in a two-day window and then have two days to get them printed and confirmed.” Brooks’ overall process “was a bit of a nightmare,” said Krotzer. “Lots of waiting, missed deadlines, things piling up.”

“We’ve seen the number of project delays drastically reduced thanks to our eight-hour print time. Even with redesign, we can get files, prototypes and review them all within a 10-hour span. Design validation literally takes half the time with our 3D printer.”
Kenny Krotzer, Brooks Running